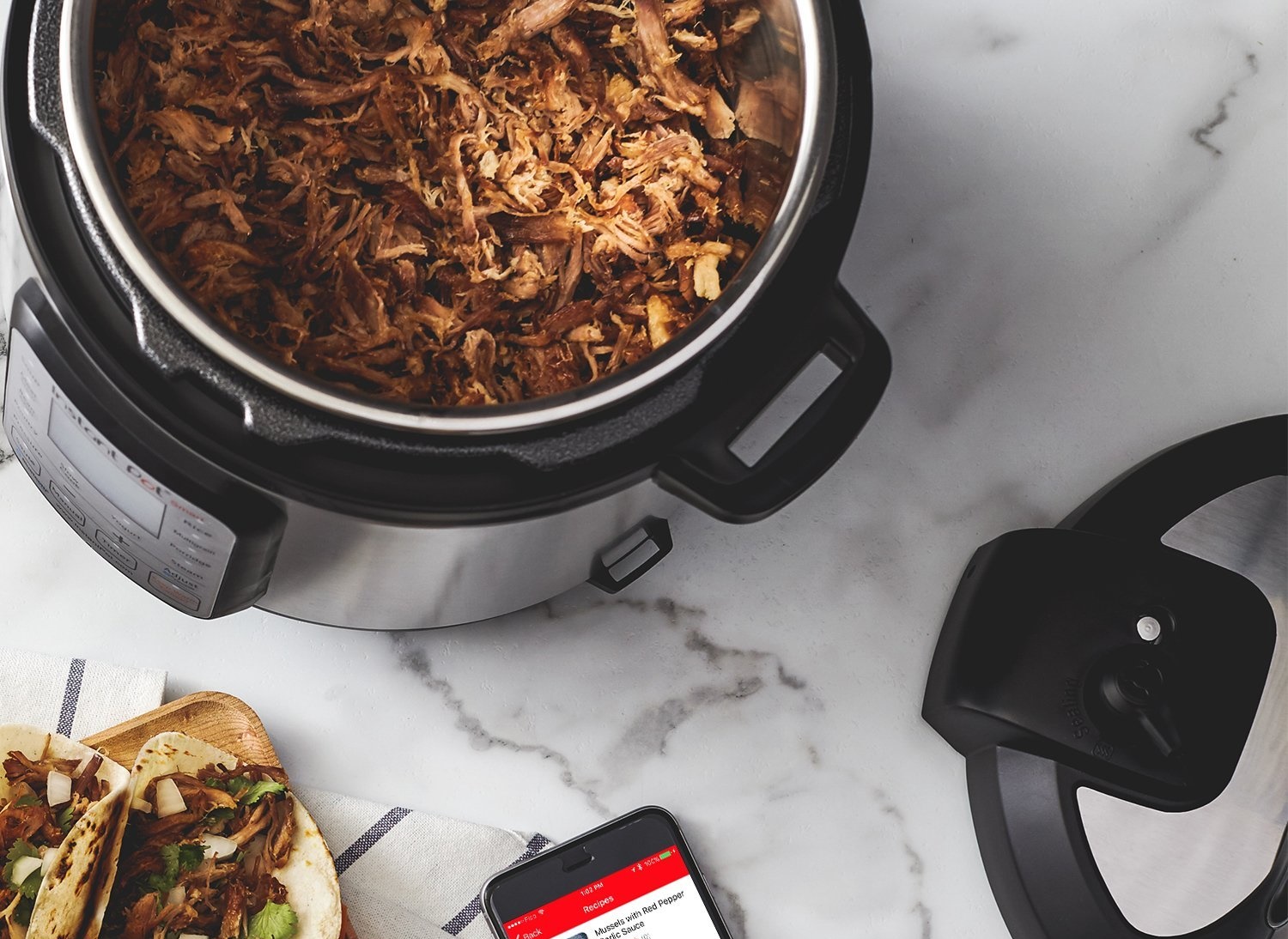 In the past few years, the Instant Pot has exploded from a cult favorite into a cultural phenomenon. If you’re reading this, you might be one of the future converts…or you might still be skeptical. After all, appliances that generate this much buzz usually fall out of popularity rather quickly. Well, it doesn’t look like that’s happening any time soon with the Instant Pot.

In this guide, we’ll take a look at the Instant Pot – what it does, how to use it, where to get one – and we’ll cover the different models (as well as some similar devices from other brands). By the end you should be well equipped to decide if the Instant Pot is right for you, and if so, which one you should buy. 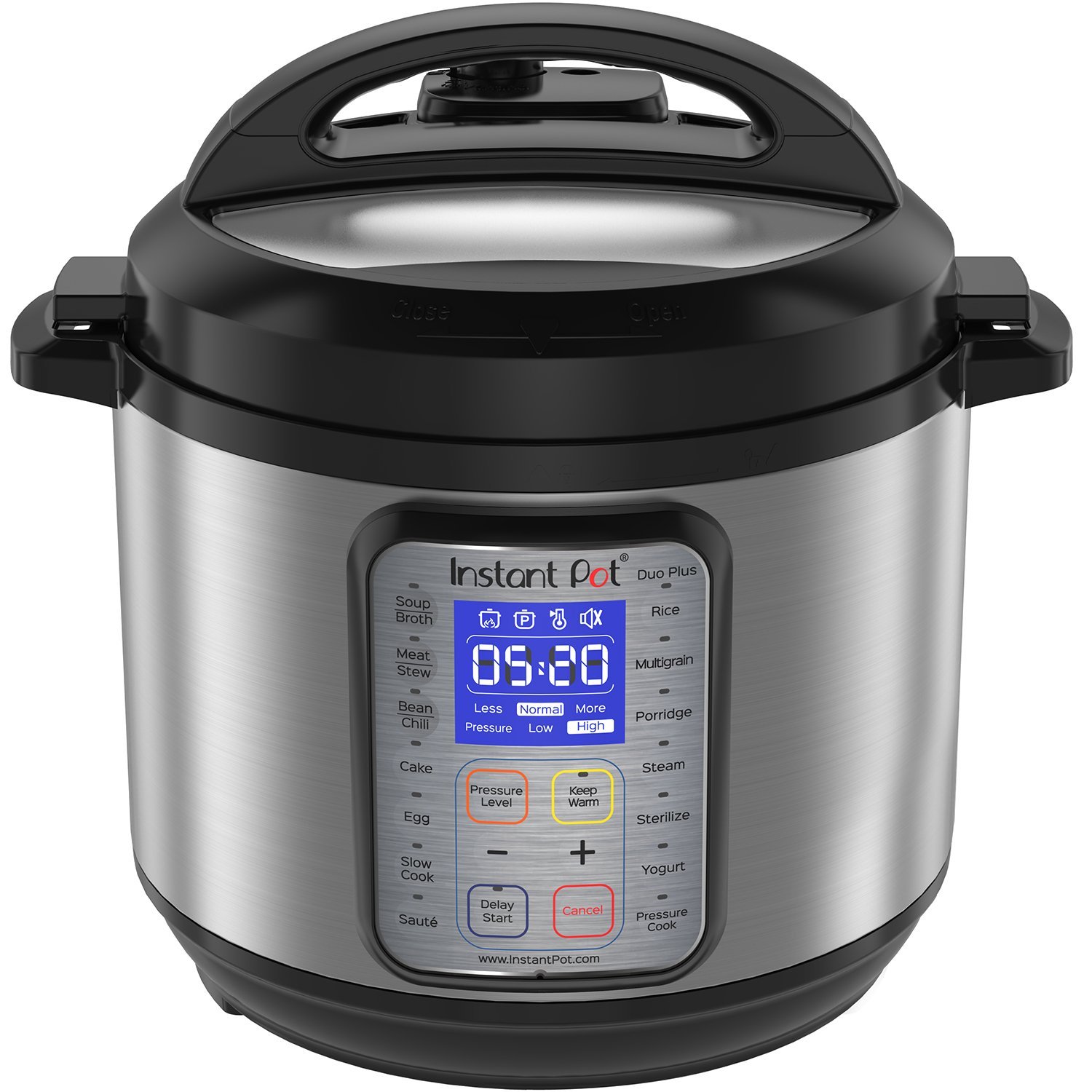 What Even is an Instant Pot?

Before we go any further, let’s make sure everyone’s on the same page regarding the actual capabilities of the Instant Pot.

Depending on which model you get, the Instant Pot does multiple functions. There are 6-, 7-, 8-, and 9-in-1 Instant Pots. All of them will do these:

Additional features may include yogurt making, sterilizing, and egg cooking. The Instant Pot comes programmed for each of the functions and includes cooking programs, quick adjustments, and an LCD display.

Essentially, an Instant Pot is a multicooker that does all the functions of 6 or more appliances all in one easy to store device. Fast cooking, minimal storage space required, delicious recipes. Sounds too good to be true, right?

While not everyone loves the Instant Pot, for many, it’s an essential appliance in the kitchen. It lives up to the hype for most people who try it. If you’re in the market for one, chances are high that you’ll like it. For those who don’t love it, the critique tends to be that it takes away from the process, or that they don’t find value in having so many functions. If you don’t intend to use the pressure cooking function, or if you already love the slow cooker or rice cooker you’ve got, this product might not be for you.

See all the Instant Pots on Amazon

If you do buy an Instant Pot, however, you’re in luck. There is a HUGE community of Instant Pot users, so there is no shortage of recipes and communities across the internet. Pinterest is chock full of recipes, and there are Facebook groups and entire blogs devoted to it.

Now that we’ve covered the basics, let’s take a look at the different Instant Pot options out there.

Which Instant Pot to Buy?

There are a few different options within the Instant Pot line. Let’s first talk about the most popular model.

The #1 bestselling Instant Pot (and #1 product in the kitchen category on Amazon) is this 9-in-1, 6 quart DUO. It’s the most recent model, having dropped in 2017, and it does the work of 9 different appliances: slow cooker, pressure cooker, rice cooker, yogurt maker, egg cooker, sauté, steamer, warmer, sterilizer, and cake maker.

The DUO Plus includes accessories like a steam rack, measuring cup, and serving spoons. The new LCD is easy to use and easy to view. 6 quarts is the perfect size for up to 4 people – if you have a larger family or want to be able to prepare more food, you’ll want to choose the 8 quart. (There’s also a 3 quart option for singles or small meal prep!) Click here to see the 3-, 6-, and 8-quart DUOs.

The next step up from the DUO is the Ultra, which boasts 10 functions instead of 9 and comes in at about $30 more. So what’s extra? Well, this version has some additional tech features, such as altitude adjustment, but mostly its claim to fame is the custom programming and updated interface.  Click here to see the Ultra. 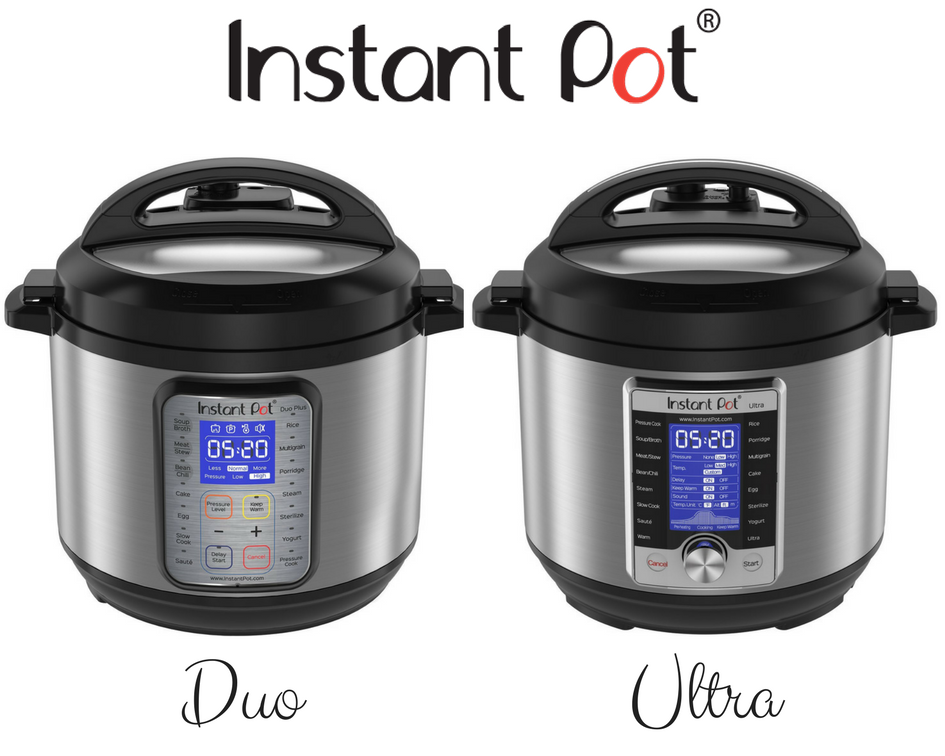 The Lux, available in 3-, 6-, or 8-quart, is the Instant Pot’s “budget” line. The 6-quart comes in at well under $100, so it’s a more economical choice for plenty of shoppers. With 6 functions available (pressure cooker, slow cooker, rice cooker, sauté, steam, and warm), it does the job for most home cooks who buy one. It can be a bit limiting, however, because it lacks some of the presets and programs of the more expensive models. The Lux only has a high setting for pressure cooking, as well. Click here to see the 3-, 6-, and 8-quart Lux models.

Though it’s definitely the most popular, the Instant Pot isn’t the only multi-cooker out there. There are a few other brands worth your attention if you are in the market for a multi-cooker. Let’s take a look at some of the top models. 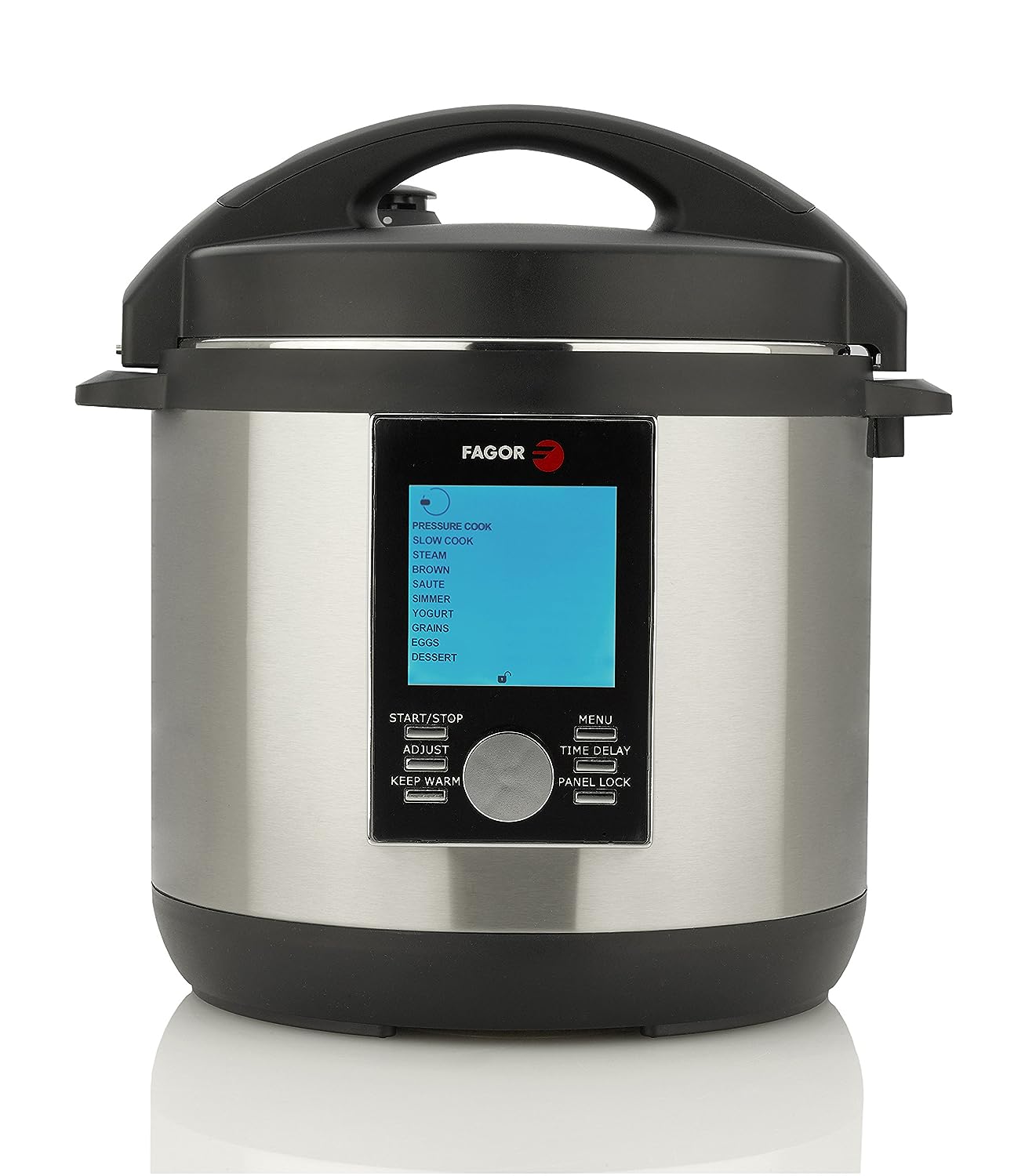 A top contender in the battle of the multi-cooker, the Fagor LUX earns top marks from customers and critics alike (even Good Housekeeping called it the “better pick.”) The Fagor LUX tends to be faster than the Instant Pot, and the overall usability and functionality makes it worth the money. 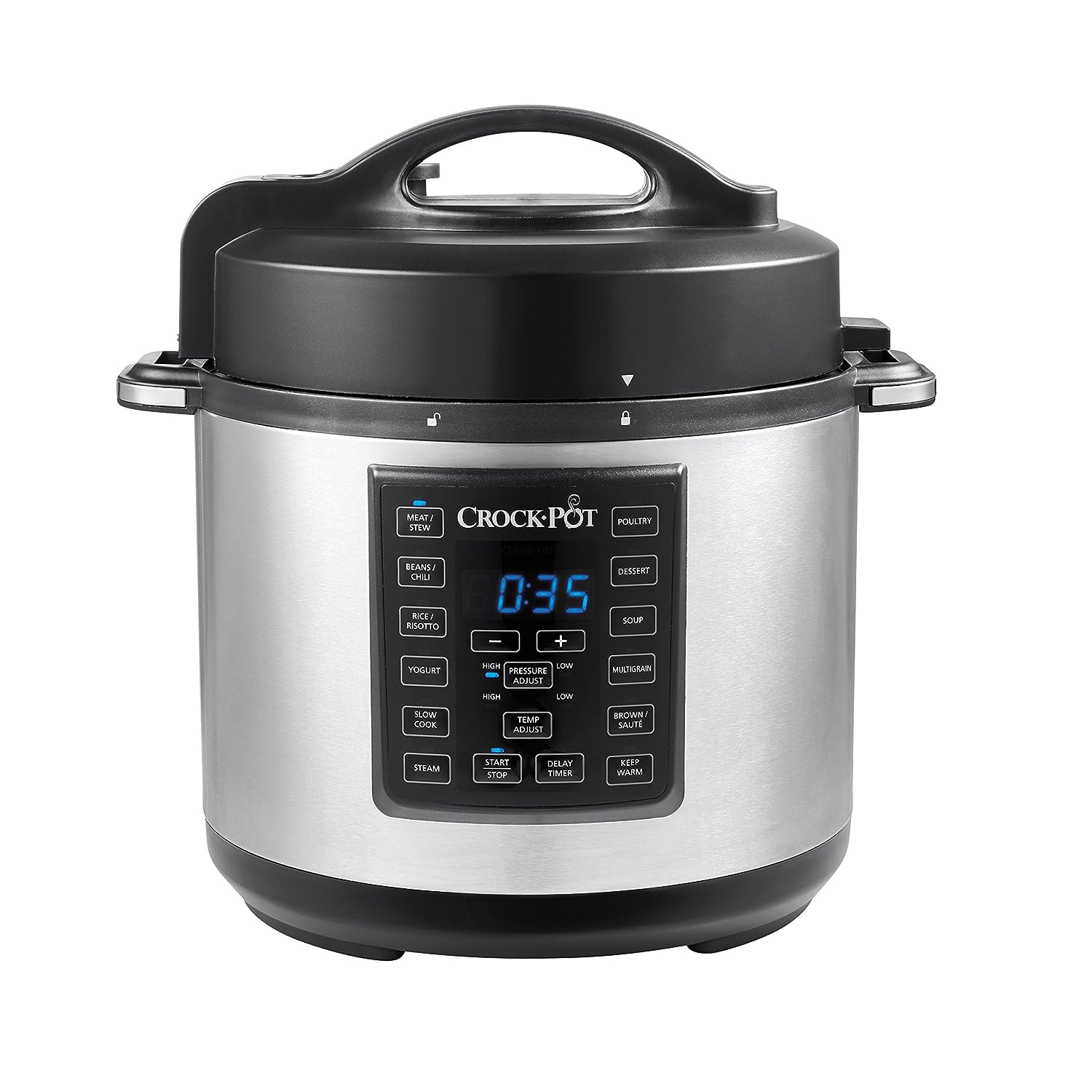 Crock-Pot is trying to get in on the multi-cooking action with their latest release: an 8-in-1 multi-cooker that’s priced lower than the Instant Pot Lux. While it’s still relatively new, early reviews from review sites and from customers are mostly positive, with many noting the Crock-Pot’s ease of use. The low price is a key selling point, particularly for those who don’t need all the extra functions and who want a moderately priced, well-functioning multi-cooker.

You’ve Got a Multi-Cooker. Now What?

There are Facebook groups devoted to Instant Potting (is that a thing?), so simply search Facebook for “Instant Pot” and you’ll find pages and groups full of folks who want to chat recipes and success stories.

Finding recipes is as simple as a google search, and large sites like Buzzfeed and Delish have compiled a treasure trove of the best recipes. And, of course, Pinterest has a massive selection of Instant Pot recipes and boards.

If you buy something other than an Instant Pot, don’t worry! Multi-cookers are similar enough in functionality to easily translate an Instant Pot recipe into a different multi-cooker. The only issue will be if you try to follow a recipe that requires a function that your model lacks (like yogurt making).

Have thoughts on the Instant Pot? Know where to get the best recipes? Let me know in the comments below!