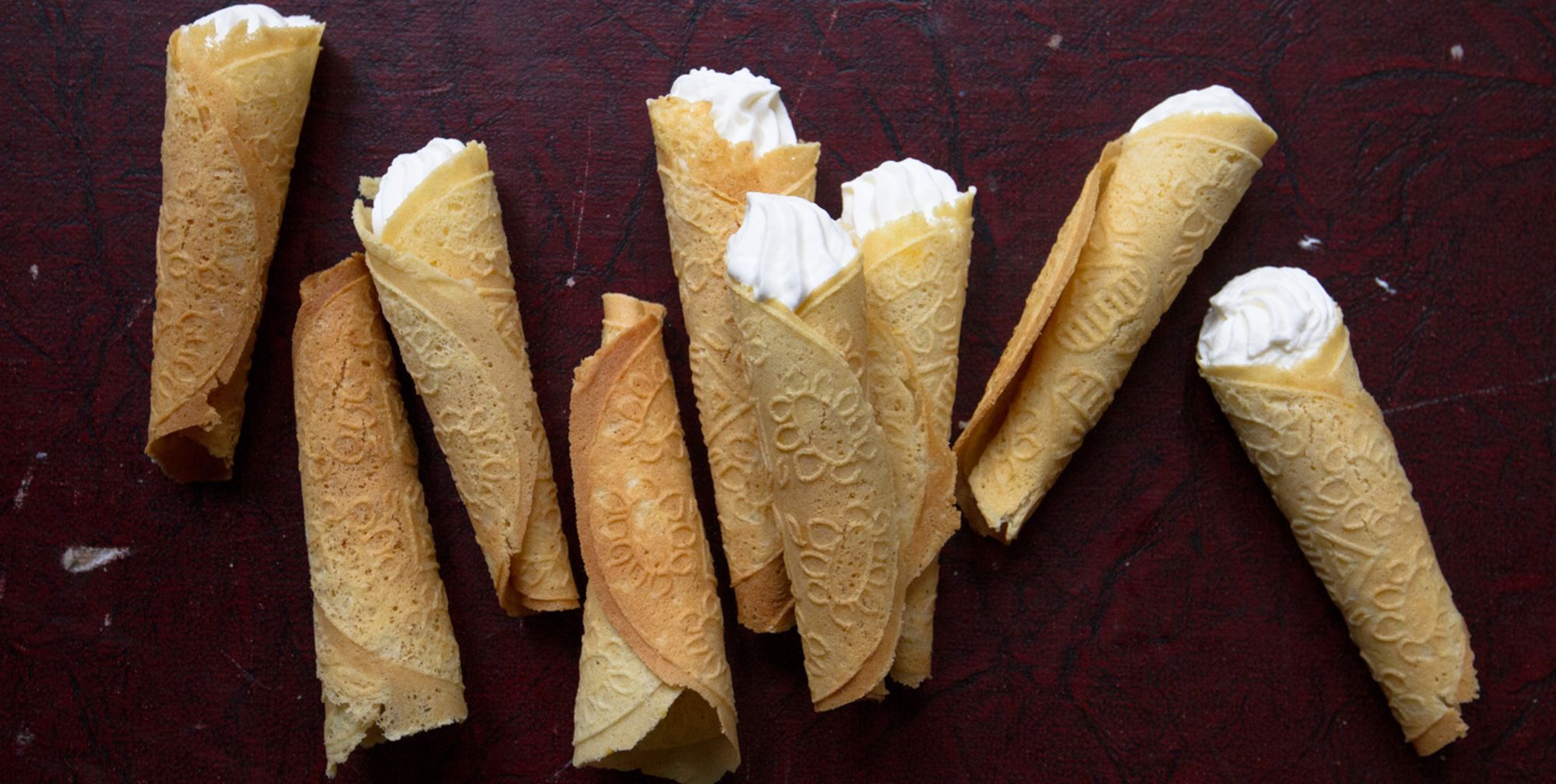 In preparation for holiday baking, I went in search of some new tools for my usual (and new!) traditional Norwegian baked goods. After acquiring my awesome new waffle maker (the Cuisinart Belgian waffle maker — my review here) earlier this year, I realized that my old sad small waffle iron did do one thing fairly well: Norwegian waffle cookies. And I won’t even attempt to make the cookies in the Cuisinart (it’s just too big for those cookies).

Anyhow, this meant I needed to find a waffle iron just for cookies, so I wanted to invest in a real Norwegian waffle maker (preferably one that makes the heart-shaped waffles), which resulted in a quest to also replace my Bestemor’s missing krumkake iron AND find a new set of forms for kranse kake.

Ultimately, I found myself entrenched in (not unpleasant) research on various tools for Norwegian baking, and I thought I’d share some of my great finds with you here! Read on for my picks of the best waffle maker, krumkake iron, rosettes, and more.

I’ve never actually seen or heard of waffle cookies like the ones my family has been making for decades, but my Bestemor’s recipe is called ‘Hard Vafler’ and the cookies are made in a waffle maker. As I mentioned, my very old waffle maker did just fine, but I figured a waffle maker meant for Norwegian waffles (which are traditionally very thin) would be best. Plus, you get the heart shape with the one I bought, so the finished product feels extra special (and, since I make these for Christmas, a little more festive!)

I personally wasn’t keen on spending nearly $60 on a waffle iron that I would only be using a few times a year, but after a ton of research I came to the conclusion that this is the only option. Other similar irons have lower reviews, and many of those reviewers compare the inferior products to the Chef’sChoice waffle maker. 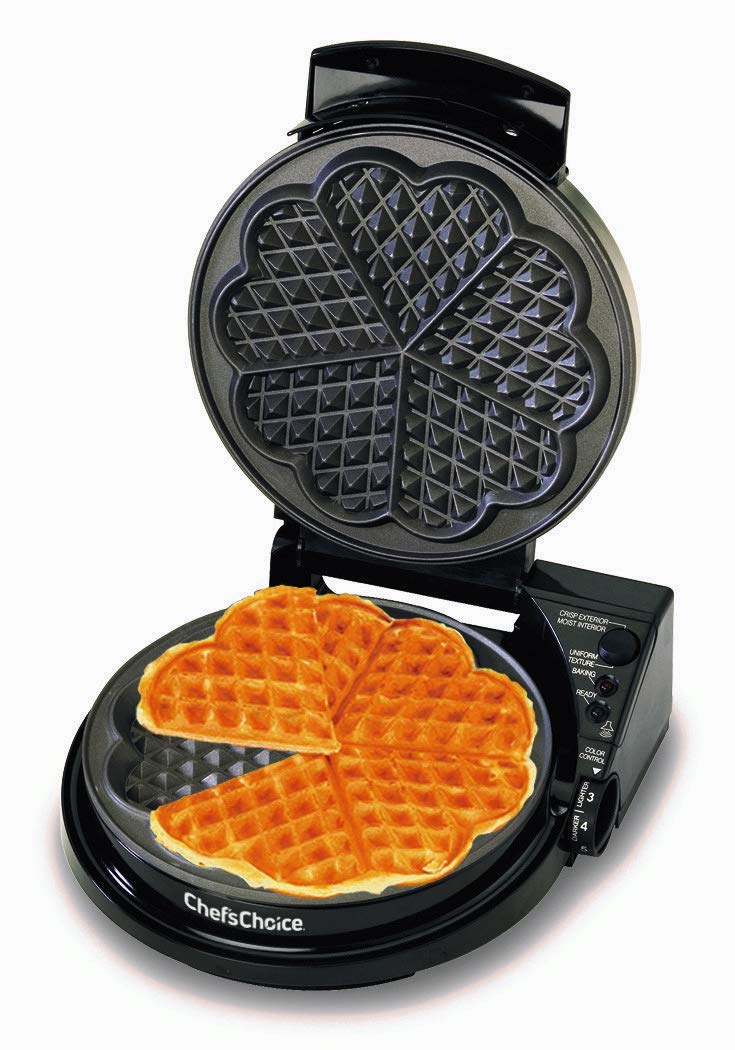 I went with a traditional iron for my own kitchen, but I wanted to share an electric option (also by Chef’sChoice) I found as well.

This is as close to your grandmother’s krumkake iron as you can get (unless you scour eBay or thrift shops for an antique). It looks beautiful and creates a traditional-looking pattern on the cookies as well. The iron is made of cast aluminum (rather than the cast iron some folks are accustomed to) and it heats quickly and evenly. It includes the rolling cone and recipes.

I’m pretty sure I’m going to eventually regret not getting the electric krumkake maker from Chef’sChoice because the reviews say it all. No more fussing with an iron, set it and forget it, super easy to use, etc. (It just doesn’t look as cool as the traditional iron, let’s be honest.) Anyway, if you’re in the market for krumkake makers, definitely consider this one. 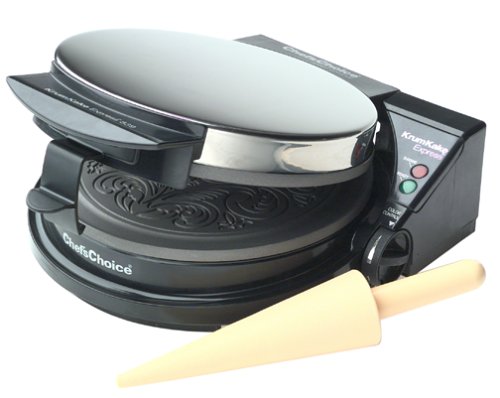 To make a lovely and festive kransekake you don’t have to have the forms, but it sure makes it a lot easier if you do. I own a very old set by Norpro that works great, and the same ones are available still. Click here for Norpro Kransekake forms, which make an 18-layer cake. (Tip: If you’ve never make kransekake before, there are plenty of great recipes out there that call for store-bought almond flour instead of having to grind your own almonds!)

There are many options when it comes to rosettes, but traditional rosettes tend to be in uncomplicated patterns like flowers and stars. In fact, some of the more complex designs are actually more difficult to use, so those probably aren’t a great idea if you’re inexperienced anyway. Our picks are simple designs from well-known brands.

This is a very basic set with just two irons, but it’s reminiscent of my antique rosettes and Bethany Housewares is a go-to for Scandinavian bakeware. The design of both the irons and the handle makes it easy to use, especially for first-timers. 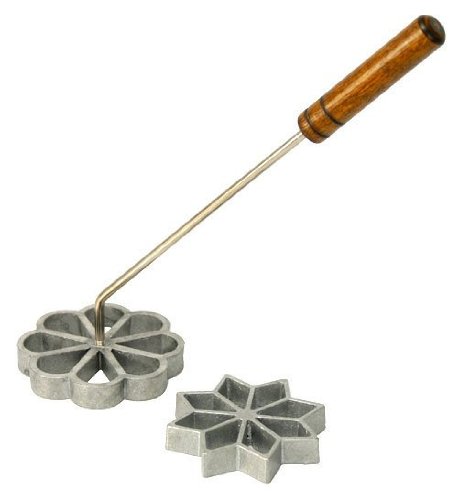 With this option from Norpro you get additional tins for timbales in addition to the rosettes. It features a two-prong handle that can make two cookies at once, though you might try doing just one at a time for best results. 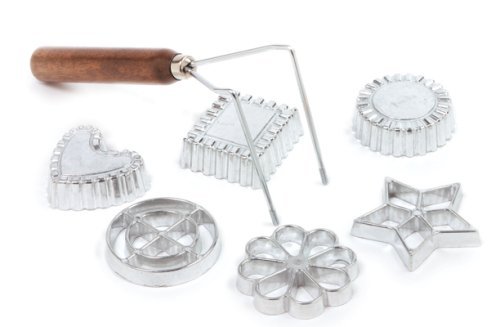 Here are a few other rosette irons to consider:

Decorative shapes are the way to go for pretty sandbakkels, and most bakers want a large set. There are plenty of options for tins under a variety of names, but we have just one preferred product. 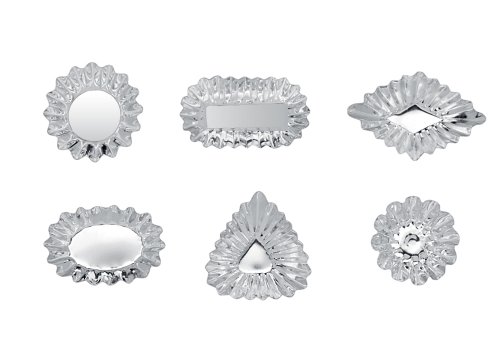 Norpro’s set is inexpensive and includes 36 tins in six different shapes. However, these aren’t at durable as the old tins used to be: Several customers reported rusting after washing.

Did I miss anything? Let me know in the comments!