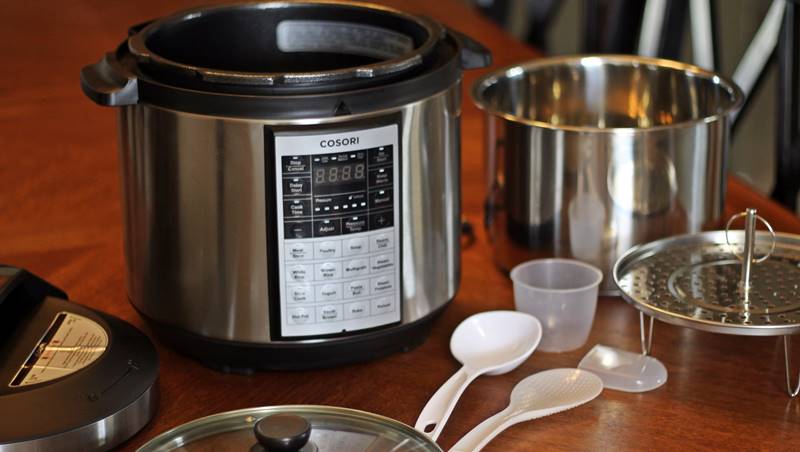 It’s often hard to justify adding another small appliance to the kitchen, but with today’s electric pressure cooker and multi-cookers, you can actually add one to eliminate others. The Cosori 6-Quart 8-in-1 Electric Pressure Cooker takes the place of  an electric pressure cooker, slow cooker, rice cooker, and more. Read on to see what we thought during our week-long hands-on testing.

I used the Cosori multi-cooker without ever having used an Instant Pot, so I had few expectations.

Size. My first thought upon unboxing it was how huge it is. It is not a small appliance. It’s about 13 inches tall with a diameter of around 39 inches, so it takes up a fairly big footprint for storage. The interior cooking pot is plenty roomy which is nice for my family of four. I can’t imagine that a smaller size would be large enough to feed all of us, so the large overall size of the Cosori is necessary if you have four or more to cook for.

Construction. The device seems sturdy and well-made. There are a ton of buttons on the control panel, which is a little daunting at first. Some are self-explanatory, but not all. Plus, most of the recipes I’ve seen call for manual settings, so the various programs aren’t always necessary. The interface overall is actually pretty intuitive once you figure out the basics. The stainless steel looks good and I haven’t had issues with lots of smudges or fingerprints.

Accessories. The Cosori comes with several items which are nice, but I really didn’t need all of them. In addition to a small cookbook, it also includes:

As I mentioned, I’d never used an Instant Pot or electric pressure cooker before, so it definitely took some time to figure this product out. My very first struggle was with the lid. In fact, it still takes some time to get the lid on. Fortunately, the device chimes when the lid is on and locked, so you don’t have to waste time wondering whether it’s on or not.

The first thing I cooked was spaghetti. It had been a long day and I wanted to do something quick and easy (with minimal cleanup). I followed this recipe (I browned ground beef instead of using meatballs). It was nothing spectacular, of course, but I loved having only one pot to clean and the ease of use. A few notes about this first cooking experience, though:

For my next attempt, I decided on a dessert: lava cake. I followed the recipe to a T, with 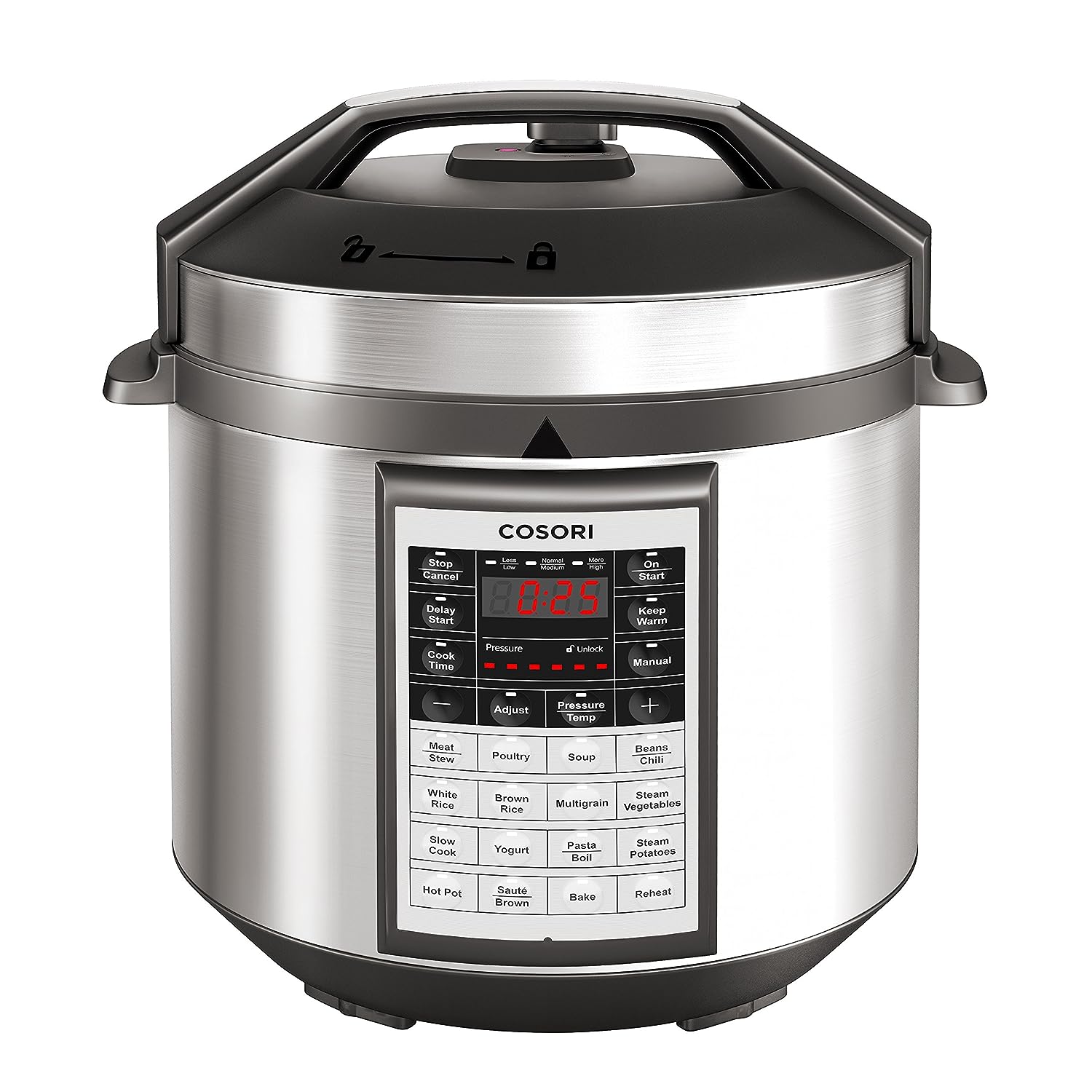 one exception. I didn’t add water to the pot. I didn’t realize my mistake until the next day; I simply thought my cooker was broken (facepalm). Electric pressure cookers must have liquid in them to function. The Cosori just never came to pressure because I didn’t add water, so I ruined some perfectly lovely lava cakes. The day after, because I was thinking the Cosori was broken, I added some water and used the Boil program. It heated right up no problem.

I’ve also tried polenta using the Multigrain function and following Cosori’s recipe (which has since been pulled off their website and replaced with this one). The polenta burned on the bottom and I’m not sure why. I was able to scrape out everything not stuck to the bottom and it was great. I’ll try polenta again in the future, but I’ll use manual settings for less cook time to avoid burning.

Making both hard boiled eggs and stew was quick and easy. The stew tasted just like it came from a slow cooker. I haven’t used the slow cooking function mostly because I really like the slow cooker I’ve got. But, it’s good to know that feature is available, and I’ve read all positive things from reviewers who have used it.

I put in two cups of cold water to see how long it takes to heat up — that took exactly 5 minutes. It obviously will take longer if you have more in there, but I’d say that’s probably about the minimum you can expect.

Even when issues arose (like burned polenta), the pot has been a breeze to clean. There’s not much more to say other than that! The inner pot is stainless steel and dishwasher safe (the glass lid and steamer basket are also dishwasher safe).

The Cosori does what it’s expected to do, which is important in the world of electric pressure cookers. There are so many recipes online that are meant for the Instant Pot or for multi-cookers in general, so having one that doesn’t work with those recipes just wouldn’t be worth it. So, there’s absolutely no reason to think that you can’t use the Cosori for any of your recipes.

Clean up is fast and easy and I can’t see any reason why there would be issues with cleaning in the future.

It is priced well — it’s a good $20+ less than the Instant Pot (and is often on sale), making it a more budget-friendly alternative to the popular electric pressure cooker.

Cosori has great customer service, which many customers will attest to. The cooker comes with a one year warranty and in my online research, it seems that the Cosori is holding up well for those who have had it for a while.

It’s big. There’s just no getting around that. It takes up a lot of room and weighs about 10 pounds. If you’re short on cupboard space, this isn’t the best addition — unless it is taking over for your slow cooker and/or rice cooker.

It can take awhile to heat up. This makes it less “instant” than you might think going into it. Yes, it’s still fast, but in some cases, it’s faster to use the stovetop. I also think this con is outweighed by the ease of use and clean up.

The beeps are LOUD. The beeping that happens when the lid is on or the timer starts, etc., is very loud, especially when compared to the Instant Pot. This is a con for me, but it might be a plus for those who are hard of hearing or for when you’re farther away from the kitchen.

I’ll be writing a full review of this Cosori cooker and the Instant Pot Duo 6 quart going head to head, but there are some key points I’ll tell you here. The biggest difference is the price — as I mentioned above the Cosori is at least $20 less than the Instant Pot.

Functionality is about the same, but the interface is pretty different. I personally prefer the Cosori at this point, but I know that is just a personal opinion — some might like using the Instant Pot better. 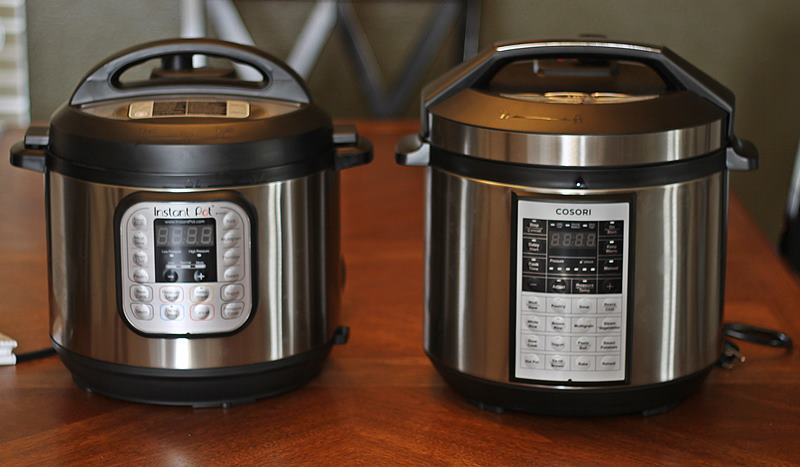 The Instant Pot is a tiny bit smaller, but not by much. It heated two cups of water about 20 seconds quicker, so I’d guess that they are about the same in terms of heating time.

I redeemed myself after the lava cake fiasco by making them again (with water in the bottom this time) in both pots. They both came out perfectly, with no real difference in the cakes themselves, so my guess is that these cook basically the same.

Bottom line? I have no problem suggesting the Cosori cooker over the Instant Pot, especially if you’re looking to save some money.

An electric cooker/multi-cooker like the Cosori 6 Qt 8-in-1 isn’t for everyone, but it’s a handy small appliance for busy cooks, those who like to meal prep, and/or anyone looking for an all-in-one that pressure cooks, slow cooks, cooks rice, and more. The Cosori performed well and impressed me with its easy cleanup and the seemingly endless number of uses. If it’s on your “maybe” list,  my suggestion to you is to go for it!