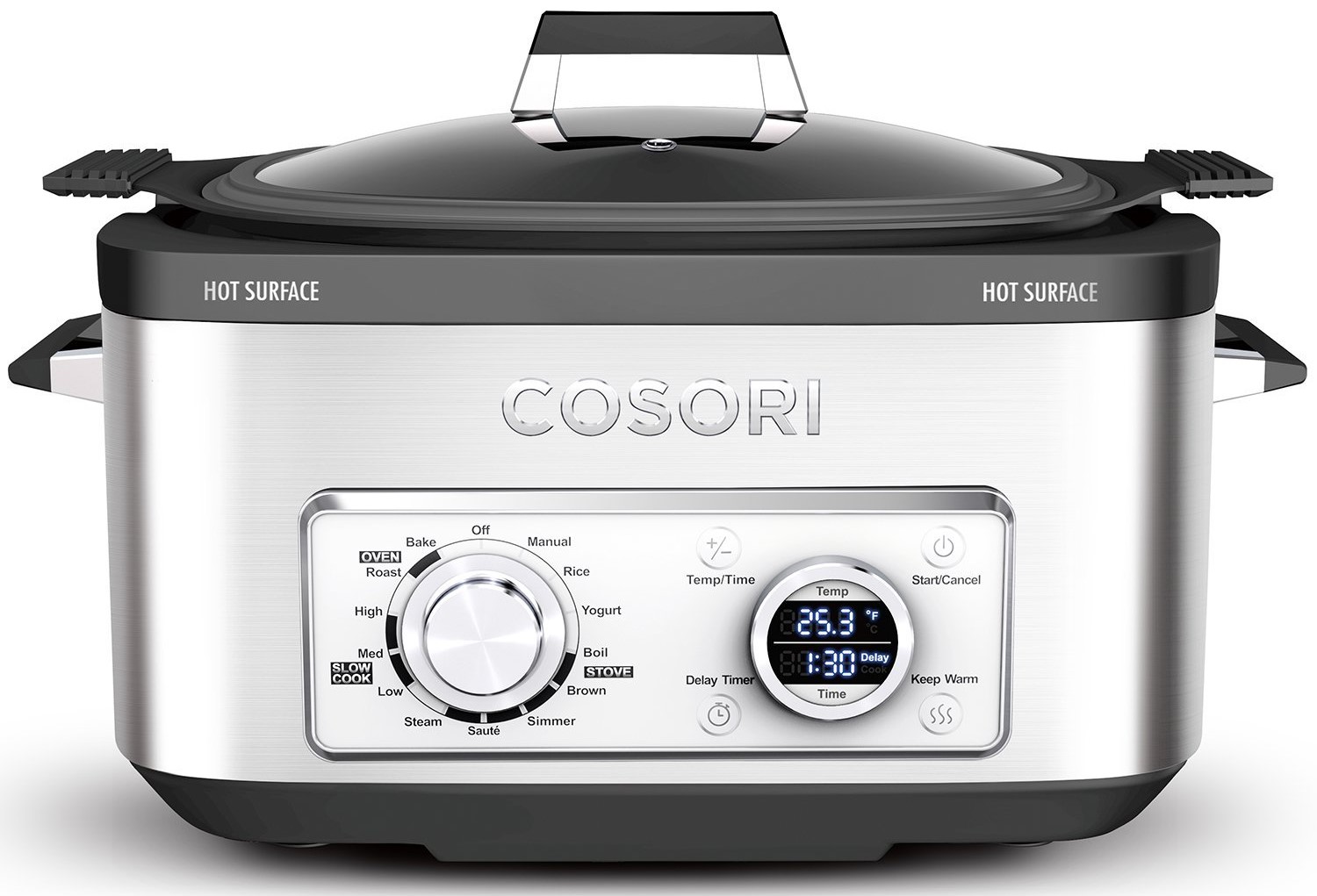 Multi-function countertop devices are all the rage these days, with a range of options offering cooks everything from electric pressure cooking to yogurt-making. Cosori’s 6 Quart 11-in-1 Multi-cooker is the most recent product we’ve had a chance to test out.

Cosori sent us this multi-cooker to test out, and we were already familiar with them thanks to our experience with and love of their electric pressure cooker (you can check out our full review of that one here). The brand has started offering more and more kitchen products ranging from these multi-cookers to blenders.

Rather than being an electric pressure cooker as most of the big names are, this Cosori cooker is a multi-cooker with that does not do pressure cooking. Instead, it offers the following functions:

Essentially, this is an alternative to your stove and oven. The functions have various settings (hence the “11-in-1” moniker), so you can do things like simmer, steam, roast, or cook rice in various modes.

Unlike the electric pressure cooker (which we tried out earlier this year), the Multi-cooker has a rectangle shape and very different display and adjustment features. It measures 17.7 x 11 x 9 inches, has a 6 quart nonstick cast aluminum interior pot, and weighs in at 15 pounds. It also comes with a steam rack. 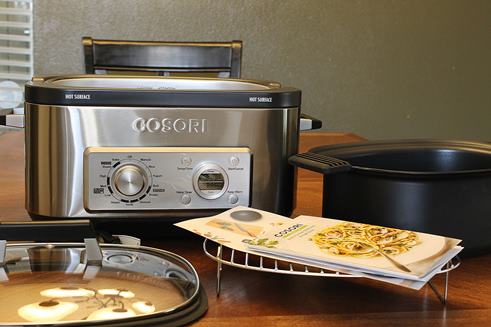 It comes with a recipe booklet and Cosori offers some additional recipes on their website, which I was grateful for as I wasn’t completely sure what to do with it initially.

I think that covers the basics, so let’s dive into the review.

Right out of the box, the Cosori is impressive. It looks well designed and easy to use. I think it looks a little fancy, even. It’s a bit heavy, but the insert itself is actually very light. It’s nonstick cast aluminum and it appears to be easy to clean and good at being nonstick (we’ll see how well it does soon). But, it does worry me a little because it is so lightweight. I wonder if it will crack easier or not last long?

The biggest issue I see with this is the size. It’s a large cooker, and I don’t think I’d have anywhere to store it without some major overhauling of my cabinets. 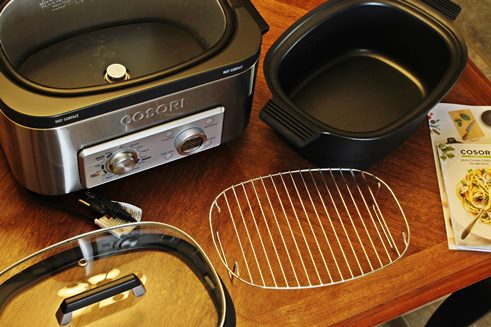 The interface is great. Plenty of multi-cookers (in particular those electric pressure cooker types) can be a little tricky and aren’t very user friendly right out of the box. The Cosori Multi-cooker has simple knobs and clear labeling so you know exactly what you’re doing.

The included recipe book also does a nice job of providing average times, temps, and settings for basic uses.

I opted to try the Beef Bourguignon for my first test, following the recipe exactly instead of using my go-to recipe or trying to play with technique or flavor — I wanted to try all the functions and cook it exactly.

The food turned out delicious. I served it over mashed potatoes and without rolls (because I burned them. Sob.) Browning, simmering, and boiling all appeared to take about as long as it would on the stovetop. I found that the adjustments were easy to figure out after a moment; you have to turn the dial to your desired function, then hit Temp/Time to adjust the temperature or time using the other turning dial. You also have to remember to hit Start/Cancel in order to get it going. I also found that if you want to change either of those, you have it hit Start/Cancel again to cancel it and start all over.

These are small quibbles but I didn’t like not being able to adjust it without starting over. I also didn’t like that every function automatically starts a timer. 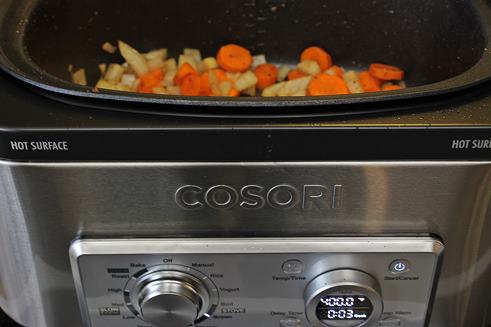 I’m glad I started with this meal and had the chance to use the multi-cooker in this way. I feel like I have a better understanding of how to use it — at least for stovetop type cooking.

Unfortunately, baking did not go well for me. I again followed a Cosori recipe exactly (this one for chocolate chunk cookies), but found the directions incomplete; the cookies were terrible. I’m not even going to share the sad pictures I took of them because they just look awful.

Instead of recounting the entire disastrous affair, I’ll give you a few of the highlights (lowlights?):

Bottom line? I would never recommend using this for baking. I can see how a crumble or something that goes in the insert might be fine. But the length of time required often isn’t practical: even their recipe for brownies calls for 2 hours and 45 minutes. That’s too long for brownies in my book.

The pot insert and lid are dishwasher safe, but the insert does not fit well into my dishwasher because it’s so large and the handles make it awkward. However, it was easy to hand wash.

There’s a gasket that fits onto the lid and it’s a bit difficult to clean, dry, and put on the lid.

This Cosori 11-in-1 Multi-Cooker has some positives going for it. I think it would be a great addition to your kitchen if:

It’s definitely versatile, and I read some great reviews where users fried or roasted chicken with great success, and plenty of users who love it for the slow cooking functions.

Having said that, it’s not for someone like me. Some of the main drawbacks I see include:

I do see the value in this multi-cooker for something like Thanksgiving — it would be awesome to use to cook a side and free up stovetop or oven space. Or, if you like to roast chickens frequently, this might be a great tool. It’s also probably a great option for summer cooking so you don’t have to turn on the stove or oven.

The reviews I’ve found online as of right now are overwhelmingly good. There are a few critical reviews that discuss issues with the insert pot coating, and that’s something I would be worried about as well. However, Cosori’s customer service is great, so I would expect that they would replace the pot if it’s a defect without hesitation. We’ve always been impressed with their customer support.

What are your thoughts on this multi-cooker? Let me know in the comments — I’d love to hear from you!