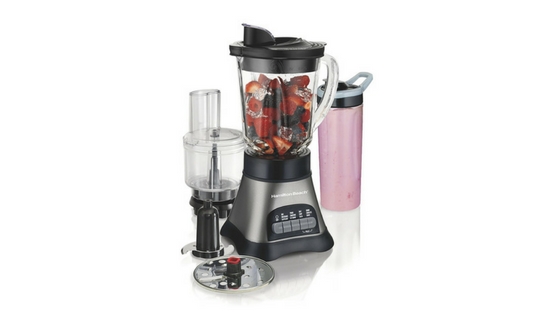 Hamilton Beach has a knack for making even their cheapest products functionally diverse. The Wave Crusher blender is yet another, even cheaper multi-function blender that could be your best friend for smoothies and processed foods.

We’ll not only look at the differences between the two, but also what makes the Wave Crusher unique.

The “3-in-1” application is a little deceiving at first. What HB really means by this is that the blender has three different serving jars-A 40z and 20z jar along with a 3-cup processor. The 20z jar is skinnier and can be taken straight from the blender to be used as an on-the-go bottle with its lid.

That also means there are at least three different ways to blend/process the contents you put into the Wave Crusher. In total, there are four different buttons for four different types of finished foods and beverages: mix milkshake, puree smoothie, chop salsa, and crushing ice.

The final two options also double as the pulse feature.

The Wave Crusher is not without its complaints, however. The blade system is smaller than the Power Elite and doesn’t mix larger contents nearly as well. Many people attribute this to the smaller than average blades at the bottom.

Versus the Power Elite

At first glance, it would be easy to mistake this the Wave Crusher with the Power Elite.

Both are pretty similar and unless you take a closer look, you may accidentally purchase the wrong one. Let’s compare and contrast:

While both the Power Elite and the Wave Crusher have 700 watts of power, smaller blades get less work done, leaving contents less mixed even after a full cycle. The fact that it does have a tough time cutting contents down to size is a bit worrisome. The noise level that is sure to come with blending ice and frozen foods is sure to be annoying for the first couple of seconds, but again, the low price is hard to pass up.

Though the Power Elite has more functions, I find myself leaning more towards the Wave Crusher. With the Wave Crusher, I can almost make the same amount of foods or beverages and for a couple of dollars cheaper. The travel jar for smoothies is a big incentive for some, you may not have access to a special bottle and lid for smoothies.

The Wave Crusher would be an excellent addition to any household looking to diversify their meals and avoid having to buy separate products for separate jobs.