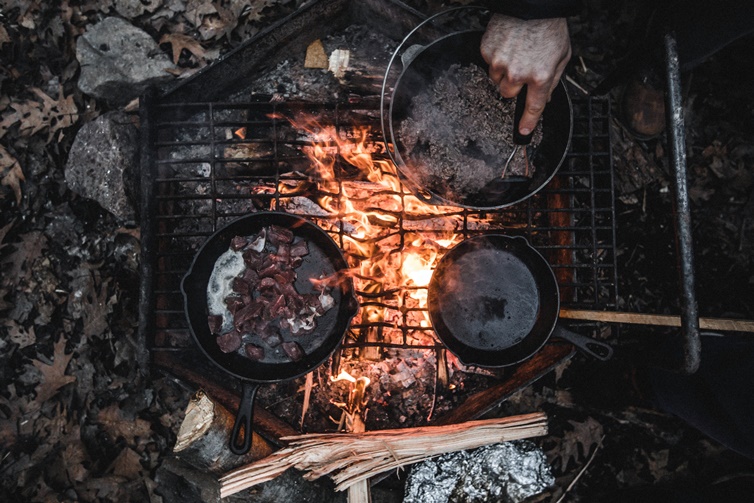 I’ve had my Lodge cast iron skillet for many, many years — long before I knew much of anything about cookware care — and I’m the first to admit that I haven’t always taken proper care of it. Recently I decided to reseason it, both to get a fresh start with the pan and to learn more about the process so I could write about it. And, well, things didn’t go so great.

As I mentioned, my cast iron pan is old and well-loved. I’ve probably mistreated it from time to time, but it wasn’t in terrible shape. Even so, it definitely needed some work to care for the crud buildup and uneven seasoning. While researching best methods (spoiler alert: there are seemingly infinite ways and strong opinions about this across the web), I kept seeing folks mention the self-cleaning oven method.

This method kept popping up in comment sections of articles, with cast iron lovers saying they did it whenever they needed to reseason — a few even sounded like they did it often. This seemed like an easy and interesting way to strip the pan AND clean my oven (it needed it).

So, the other morning I gave it a whirl. I set the skillet upside down in the oven, popped it into self-cleaning mode, and went about my day.

What I Did Wrong

After the self-cleaning cycle and cool down period, I took the pan out and immediately noticed reddish dust all over it. I used some hot water and soap to try to clean it off and… things quickly got worse. By the end, my skillet looked to be completely covered in rust.

So, of course, I panicked.

After digging through cookware forums and comment sections for what seemed like hours, I started finding a lot of other cooks experiencing the same thing. I realized the main issue was the hot water (plus trying to dry it in the oven rather than with a towel) and what occurred is called flash rust. (If you’re interested in what it *is* and some of the science, check out this article.)

Washing in hot water, not drying by hand, sticking the pan into the oven to dry: All of this contributed to the problem. Ultimately, I ended up with an incredibly awful looking pan, so I dug into some of the offered solutions I found online.

How I Fixed It

One helpful article I found (after I started my repair process) explains:

As you wipe the piece dry, you may get a black or brown residue staining the paper towel. It’s not unusual. Cleaning methods like electrolysis convert red rust to a soft black form of oxide. Clean, bare iron will also begin to oxidize again almost immediately, by a phenomenon known as flash rusting, especially if ambient humidity is high. That’s OK, too. Both will wipe off as you apply the first coat of seasoning fat.

Even if I had found this prior to trying to salvage my pan, I still would’ve taken steps to get rid of the rust. It might not be a big deal, but I worried about it anyway! And, I’m not sure what level of flash rust is OK. Ultimately, I didn’t get it perfect after my process, but this kind of info (which I read time and again) made me feel better about how the pan looked prior to seasoning.

Anyway, several sites and commenters recommended using a vinegar bath and letting the pan soak first, but then I read a few who successfully used Barkeeper’s Friend. I decided to take that route first.

Barkeeper’s Friend removed much of the rust. It took time and a lot of elbow grease, but it worked. Paranoid as I was, I used only cold water to rinse, then immediately dried the pan with a towel and slapped a coat of canola oil on it. Here’s a breakdown of the critical steps:

1. Follow a rust-removal process (for me, that was Barkeeper’s Friend, but there are plenty of other methods suggested: here’s a thread full of various things that have worked, and I liked this Redditor’s explanation)

2. Do a final rinse with COLD water (I used cold the whole time for good measure)

3. Quickly towel dry (if your house is very humid, you may want to have a fan on you, too. Also, be sure to use a towel that isn’t going to leave lint or fibers because you need to do the next step immediately)

4. Coat with oil to stop oxidation (I used canola, but there are plenty of sworn-by products including Crisco and flaxseed oil)

That final step was simultaneously the first step of seasoning the pan. That process is much more than I want to get into here (there are, after all, thousands of articles and threads about how best to do it), but I’ll tell you that I followed the steps outlined on Serious Eats here. I’m a big fan of Serious Eats and that particular article is straightforward and easy to follow, plus the comments that follow have plenty of additional insight as well.

So, I followed those steps to season my pan, even though there was still a bit of reddish stuff left on the pan and coming up on the paper towel as I applied my first layer of oil — everything I found on this indicated that it was okay.

After the first round, no discoloration came off the pan. After the fourth round, my pan was still a brownish, almost bronze color, not the sleek black coating I’d been expecting, which had me worried.

The photo above shows the brown patina I was left with (although it looks darker in person). I found *many* forums and articles that said, “that’s okay” (here’s a Chowhound thread and one on Reddit). From what I’ve gathered, this will turn black over time and with use. I’m a little bummed that it doesn’t look like it did before, but given what a mess this whole situation was, I’m just glad it’s usable!

I cooked with it last night and everything seemed to be fine. It’s definitely not non-stick at this point, so another thing I lost was the nonstick coating I’d built up through the years.

So, it’s in working condition now, and obviously I learned a ton about cast iron. So let’s get into the question I asked myself the moment I took it out of the oven: was this even worth it?

Did I Even Need to Do This?

In short, I don’t think so.

While I wanted to clean off the crud and even out the seasoning, I really didn’t do much beyond some scrubbing to try and address the problem. When the self-cleaning oven method kept popping up during my research, it seemed like an easy way to fix the pan and learn something to share on this site. (I accomplished the latter, at least!)

So, while I learned much more about cast iron properties, care, and issues, this entire process took hours and was kind of stressful. I also didn’t think through the fact that it will take time to get it back to the nonstick surface I’m accustomed to. If I could go back, I would definitely try taking down some of the coats on the inside and then reseasoning before taking dramatic steps.

In my searching after the flash rust incident, I’ve found quite a few compelling arguments (mostly in comments or forums) *against* using a self-cleaning oven, ever. But that also contrasts with the many folks who swear by the method for taking care of thrift store finds and so forth. My recommendation for anyone considering this method is to do LOTS of research, read through plenty of articles and threads of comments before you commit. Not understanding how cast iron reacts and not knowing about flash rust meant many surprises and plenty of doing things wrong.

That’s my story! I’ll update this in a few months with how things are going with my new *brown* pan.

I’d love to hear any of your tips, questions, or experiences with reseasoning cast iron. Drop ’em in the comments if you’ve got anything!