Late last year we tested a hard anodized nonstick pan from newcomer Kitchara Cookware. Immediately I began comparing it to the popular All-Clad hard anodized skillet, both because it’s built similarly and because I’ve been using the All-Clad at home for a while now.

Since these two pans are so similar in design, functionality, and price, we decided to put them to the test for a comprehensive comparison for readers who might be deciding between the two. Let’s dive in!

I did some testing in my kitchen with these pans, but I have to tell you these are completely unscientific tests. The primary thing to note is that the All-Clad pan I tested is one I’ve had it for over a year. The Kitchara pan, on the other hand, is much newer, and has therefore been used much less.

Additionally, my tests are pretty basic. I performed the same tasks in each, but didn’t get temperature readings or anything like that. The most advanced technique I used was setting a stopwatch to keep track of how long things took!

With that in mind, here are the results, comparison, and my verdict. 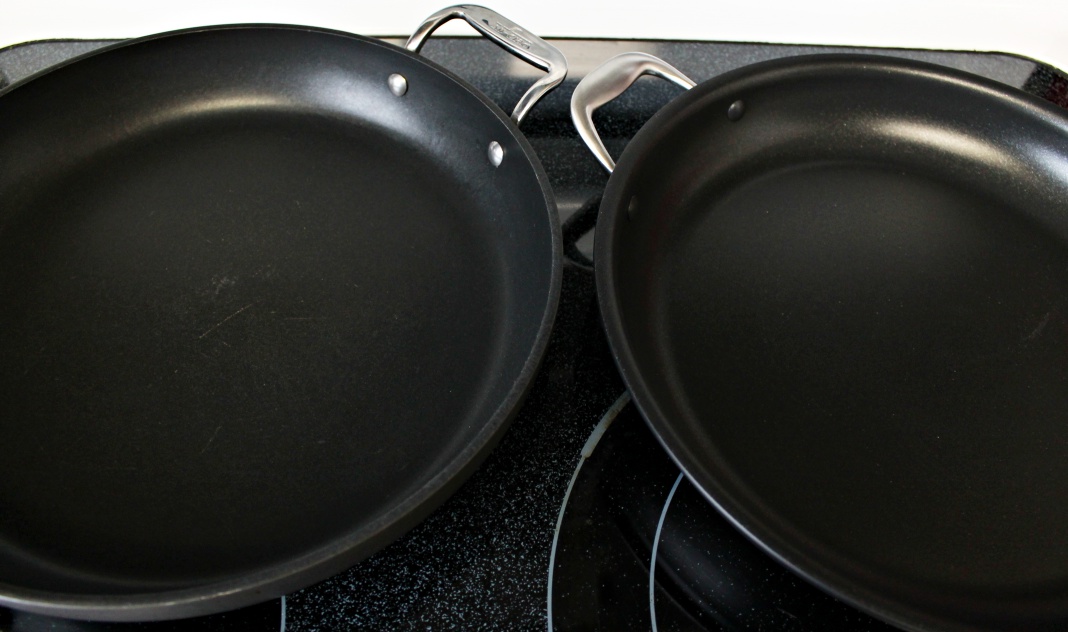 Very little separates these two pans in terms of design. Both are hard anodized aluminum, so weight and appearance are similar (Kitchara’s interior is a touch darker). Both also include a glass lid, with the only real difference being the venting hole in the Kitchara lid.

I looked into venting holes to see whether it’s better to have one or not. It boils down to preference, primarily, with many finding no real difference in lids with and without. The purpose of it is essentially to prevent things from boiling over, which may be handy for some cooks. So, not really a necessity, but handy for some. I read a few forums and articles about whether it’s bad to have a vent — if it would impact cooking negatively — but for a frying pan I don’t see where this would cause problems based on what these pieces are typically used for.

Of course, there are minor design difference in the lid and helper handle, but not enough to make a verdict on which is better. The helper handle is slightly larger on the All-Clad, so perhaps that might be something to note?

Now, the biggest difference is the long handle, which we’ll talk about next.

The All-Clad handle is… well it’s pretty controversial. Fans of the brand say you have to hold it correctly. Plenty of cooks have found themselves frustrated by the design. It is u-shaped, with a hollow center, meaning if you hold it overhand the sides dig into your palm. Ouch. 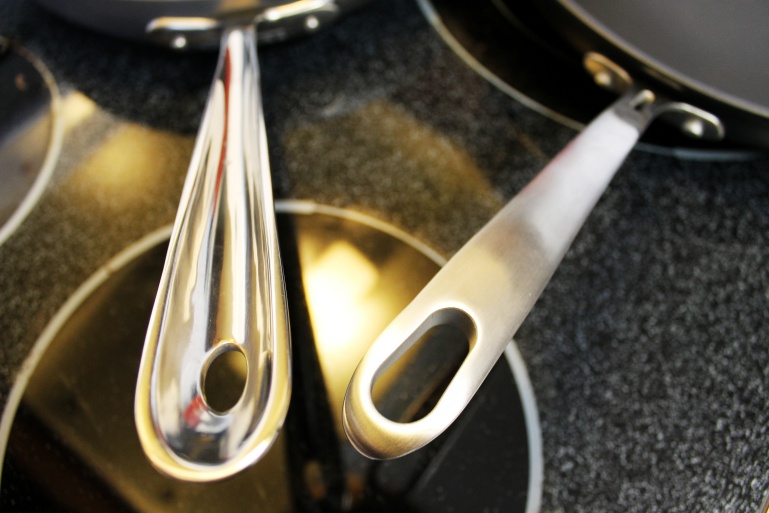 I’ve never mastered holding the All-Clad handle, though my husband (who has a different grip and much larger hands than me) hasn’t ever had issues. I tolerated this handle for a long time before finally buying a silicone handle cover (this one) that helps but isn’t a perfect fix.

When I started using the Kitchara pan, I loved that the handle is sturdy and more universal. It’s thinner and has a small knob on the underside that is useful for gripping. And there’s nothing that cuts into my hand when I’m trying to transfer a full pan from the stovetop to the oven.

All-Clad’s handle has been a significant part of their aesthetic for a long time, so there’s plenty of info out there on the ‘right’ way to manage the handle as well as plenty of unhappy cooks who hate them or people like my husband who aren’t bothered in the least.

I’ve used both pans for numerous dishes, so I can tell you anecdotally that I see little difference when it comes to cooking with either of these. For this review, I decided on a simple test (fried eggs) to see how they match up.

I added 1 teaspoon of ghee into the middle of each pan. Both were on burners of the same size (slightly smaller than the pans themselves) and set to medium. 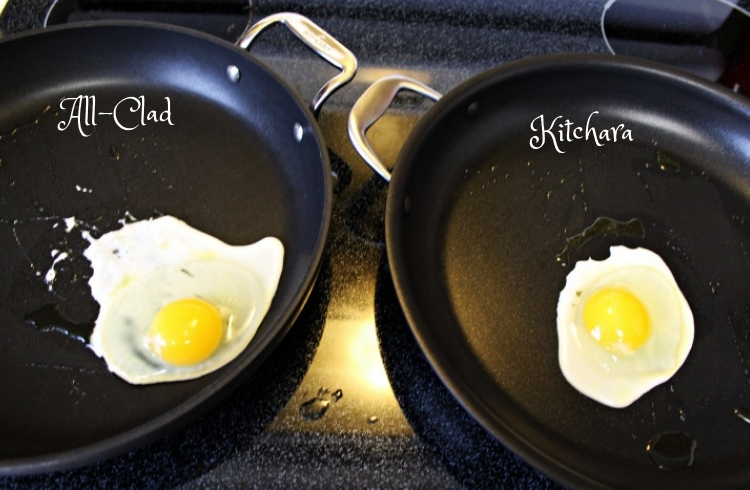 The ghee melted at basically the same rate and both pans were ready for the egg at about the 6-minute mark. The only notable thing in this step is that the egg in the All-Clad pan slid to the side. I’ve noticed that the All-Clad pan is slightly concave but I have chalked that up to use over time as I don’t remember it being like that at first. Also, it’s not a significant amount — nothing that has ever affected my cooking.

I flipped both eggs at the 9-minute mark and finished at 11. The doneness of the eggs were identical, with only a slight difference in shape. I didn’t touch them in the pan except for the flipping, so the result is from a mostly hands-free experience. 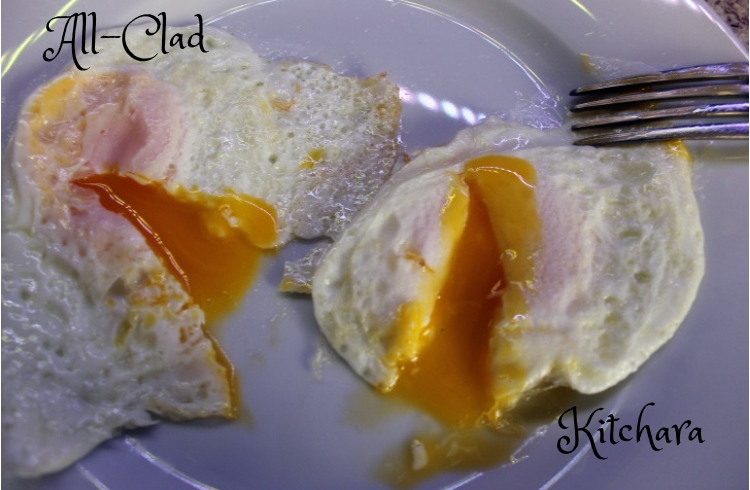 Again, these two pans are so similar that it’s difficult to point out notable differences that the average home cook will care about. The most significant difference regarding cooking is that there is a slight slope difference between the two on the inner sides. All-Clad is flatter overall, and the Kitchara pan has a slight slope. Ultimately that makes for more surface space on the All-Clad but the Kitchara is slightly easier to scoop out of. Not a significant difference here, but one I thought I’d point out.

At the risk of sounding like a broken record: Nothing to report here. I’ve washed both by hand and in the dishwasher. Both clean up super easy. Both managed the dishwasher the few times I ran them through.

A very small difference to point out is that it’s a little easier to fit the Kitchara in my dishwasher because of the shape of the helper handle. Both pans are large and tricky to fit in the dishwasher, but hand washing is the best method for this (and most other) cookware anyway.

On both pans it’s common to get grease or liquid stains on the outside. Don’t use steel wool on this! Use a non-abrasive pad, soak it for just a little bit in water and dish soap, and/or use a baking soda and water paste.

Whichever pan you choose will offer a great cooking experience. Both pans are large and cook and cleanup well. Pricing is about the same and both brands offer lifetime warranties. Having used both of these pans for a number of dishes, I can say with certainty that these are both versatile and sturdy pans. All-Clad has the well-known name going for it, so it’s easy to find and backed by years of experience. Kitchara is a new, up-and-coming brand with great customer support and a better ability to handle customer issues or questions.

The long handle is the sticking point for me and I imagine for a lot of shoppers. I tolerated All-Clad’s handle for a long time, so having a comfortable handle on the Kitchara — one that I don’t even have to think about using — is a relief. Because of that handle issue, my pick overall is the Kitchara.

Have more questions about these pans? Leave a comment below!