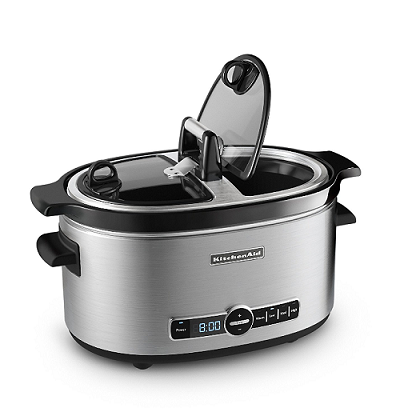 KitchenAid as a slightly different take on the slow cooker design, but adds some new abilities to further expand your slow cooking abilities.

KitchenAid’s 6-Quart Slow Cooker comes with a few extra features to diversify your cooking experience. For a moderate price increase, you’ll get a larger insert and some new settings to play around with.

KitchenAid’s slow cooker comes equipped with the Easy Lid or the standard lid depending on your choice. The Easy Lid has two separate openings that can be opened from either side of the cooker. It may not seem like the most intuitive feature on the cooker, but it does allow two people to scoop from cooker at once. 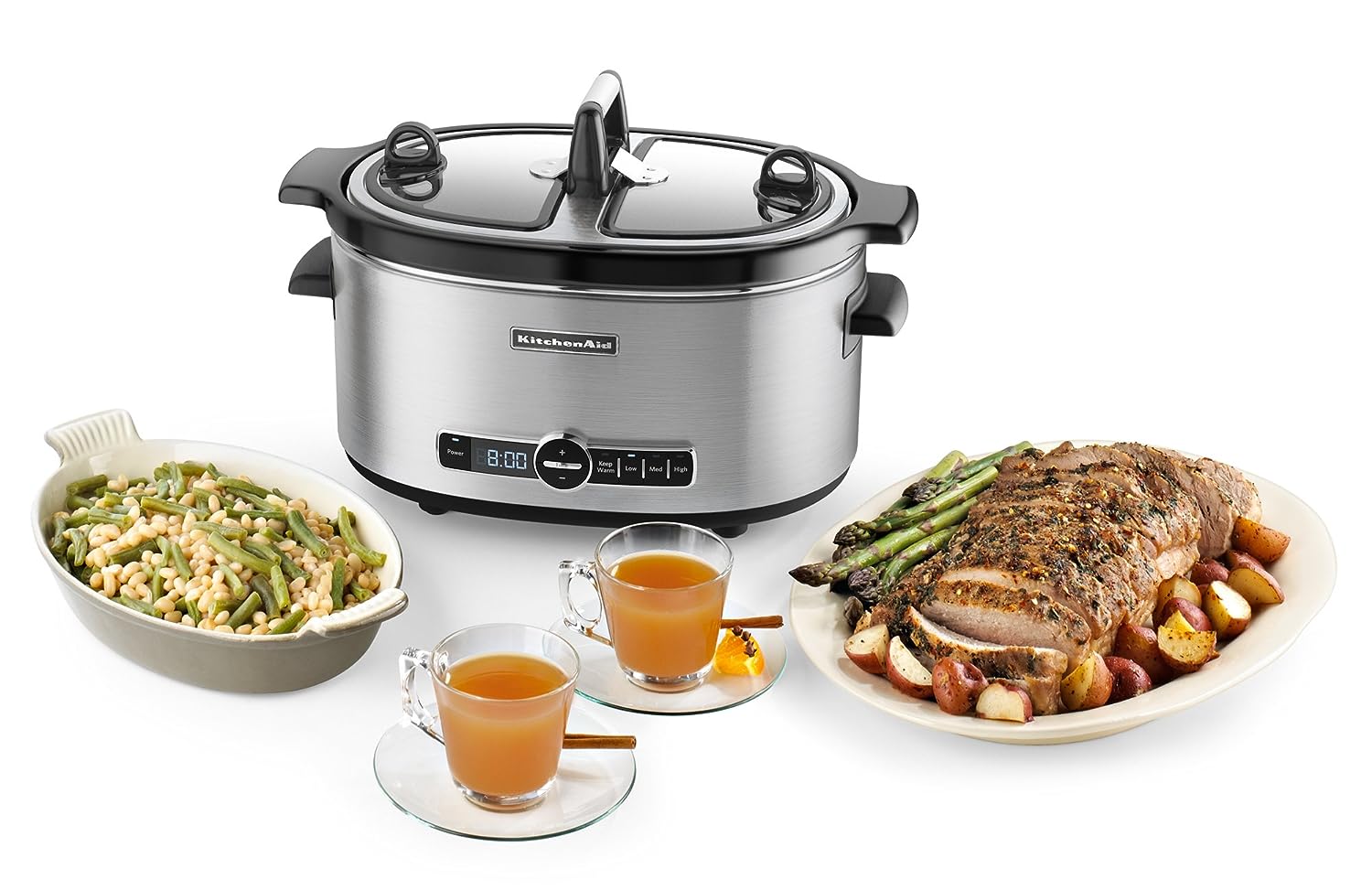 The insert is of ceramic construction and removable from the main body of the cooker. It and the lid are dishwasher safe, which is going to safe you time and effort in the long run.

At 6 quarts, the KitchenAid slow cooker sports one of the larger cooking capacities among slow cookers. Depending on what you’re cooking and how much of it is stuffed inside, you can serve a whole family or party of 5 or 6 people.

The KitchenAid cooker features some noticeable improvements over small slow cookers. First, it has an extra medium setting in between the low and high setting. This medium setting gives you more options for cooking the usuals, as well as other foods that might not work with the high or low settings.

You can also set the timer for a 24-hour cooking period with 30-minute increments. A digital readout display how much time is left in the cycle. You can also use the buttons to the right of the timer to add or subtract time. This little feature gives you more control over your the cooking level of your food compared to cookers that don’t have timers.

Once the timer is up, the cooker automatically switches into warming mode, while will keep contents warm for up to four hours. The benefit is that you can be away from the cooker when this happens, whereas small or less advanced cookers require you to do it manually.

The early reviews of the KitchenAid cooker have criticized the cookers’ buggy nature, as the high settings sometimes wouldn’t reach maximum temperature quick enough to fully cook contents. However, in the past couple of months and year, these complaints have mostly subsided.

While not exactly the cheapest slow cooker, the KitchenAid cooker still has a total below $100. Its 6-quart capacity will feed a large number of people, so you shouldn’t worry about using up all the contents on the first serving. 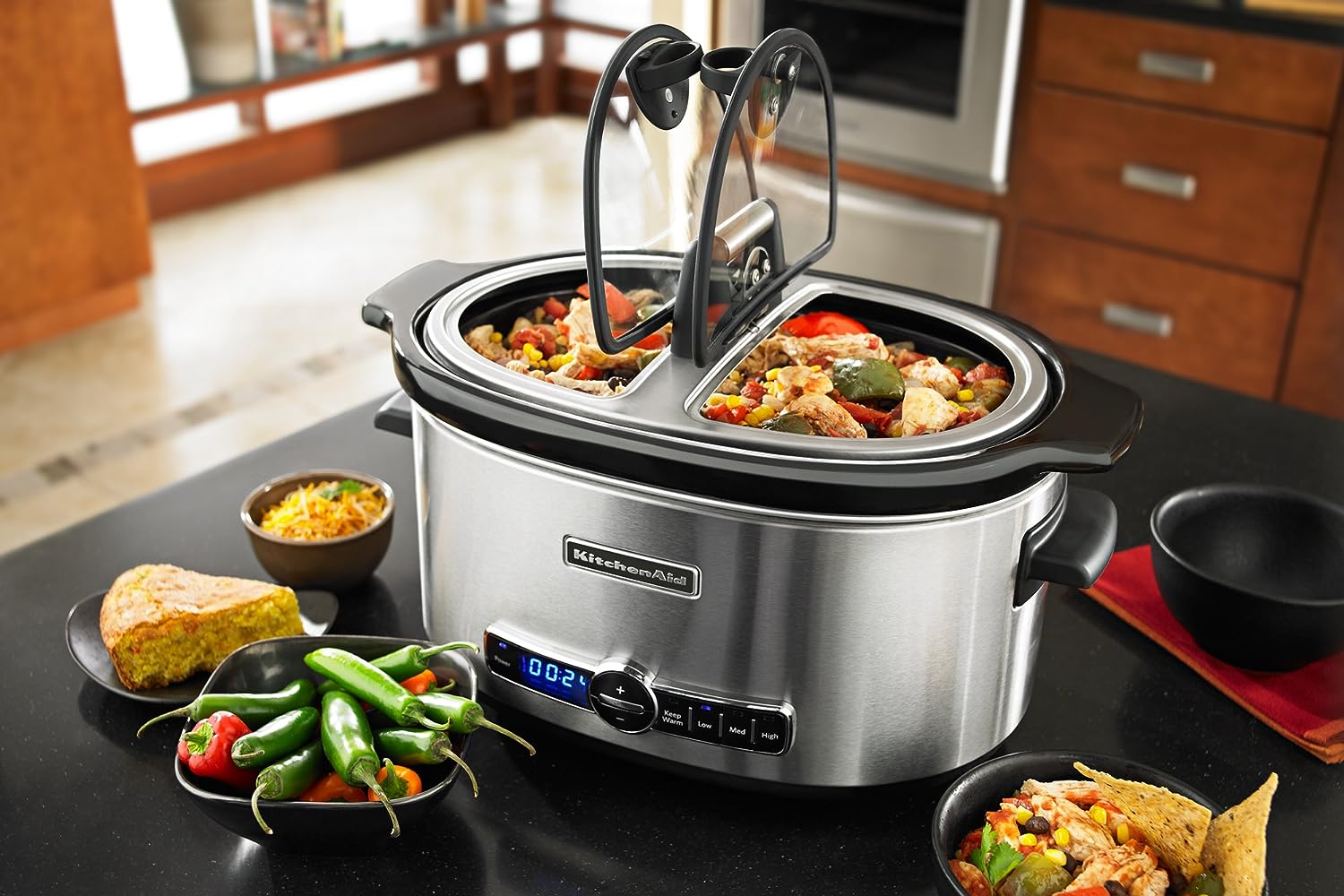 The slow cooker has some pretty mixed reviews. Most have to do with the cooker having scratches or dings along the body when it first arrives. There have also been problems with the lids not fitting directly in the cooker.

In the past year, however, these reviews have grown rarer as KitchenAid has probably corrected those problems and put out updated models. In our opinion, this cooker is worth the upgrade from smaller cookers if you’re looking to feed larger amounts of people.