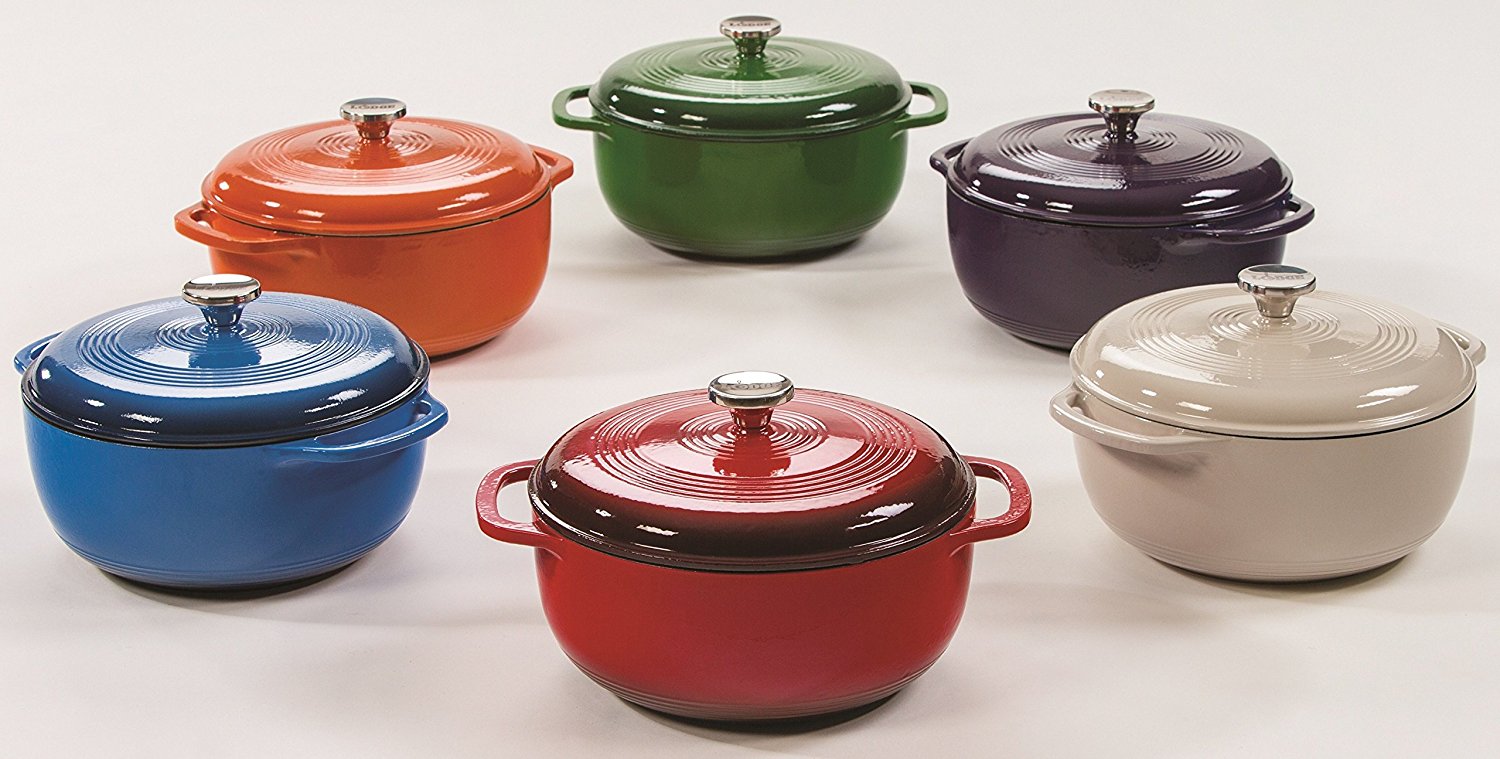 When you’re on the hunt for a Dutch oven, you’ll find pretty quickly that there are a few names you’ll hear about right away. Lodge is one of those names.

Before we get into the full review of the Lodge Enameled Dutch Oven, let me tell you just a bit about the Lodge brand.

About the Lodge Brand 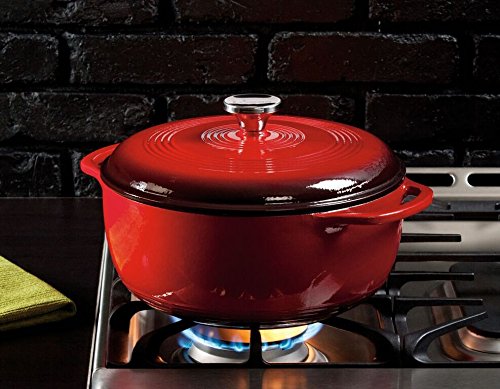 The Lodge brand has a rich history of creating exceptional cast iron cookware from the Appalachian Mountains in Tennessee. In 2005, Lodge made the leap to enameled cast iron, offering a more affordable option to Dutch and French ovens from brands like Le Creuset and Staub.

Lodge enameled Dutch ovens can be found for under $100 (in contrast to over $300 for those other brands) and are well-reviewed overall. While most of Lodge’s products are manufactured in the U.S., the Dutch ovens are made in China. Lodge explains why here, and it’s worth noting that they still produce over 80% of their products in the United States. (It’s also worth noting that it’s pretty difficult to find cookware — especially enameled cast iron — that’s produced in the U.S. period.)

Related: Our Reviews of the Best Dutch Ovens

The price of the product and the location of the company are two of the big appeals for consumers looking into the Lodge brand. But do the products hold up over time? The bare cast iron skillets that Lodge is most famous for tend to be passed from generation to generation, so we know those are well worth it. So let’s talk about the enameled Dutch oven.

I’ve had my red, 6 quart Lodge Dutch oven for about 10 years now. I use it a few times a week in the cooler months, and I make a wide variety of dishes in it, both on the stovetop and in the oven. I even recently tried baking bread in it, and I’m totally hooked.

When I bought it years ago, I made the decision solely based on price. I didn’t do any research and I didn’t know much about how to care for it. I doubt I’ve done much to baby it through the years, with the exception of hand-washing it each time and mostly avoiding metal utensils.

I still have it, and I still use it, and it still works beautifully. I’ll go into more detail below but I first want to let you know (in case you don’t want to read all the way through) that I absolutely 100% recommend this Dutch oven. When it comes time to replace it, I will be splurging on a Le Creuset, but this has been more than worth it in terms of cost and it has been kicking butt in my kitchen for 10 years. For a beginner, or for anyone who wants to avoid the high prices of the French ovens, Lodge is a perfect choice.

With all that in mind, let’s talk about some specifics.

This Lodge Dutch oven performs like a Dutch oven should. I’ve never had any issues with it, and it turns out excellent meals every time. I haven’t compared it head to head with any other pots, but I did read several reviews online and discovered that it performs as well as any of the more expensive Dutch ovens.

The surface space of the Lodge is smaller than Le Creuset and Straub, but it has worked fine for me. I would like to have more space for browning, but it has not been a burden by any stretch of the imagination.

The Lodge Dutch oven has its own look, and to me it’s not quite as aesthetically pleasing as the French ovens. Even so, there’s nothing inherently ugly about the Lodge, and obviously, it’s all a matter of personal preference.

Over the years, my Dutch oven has changed in appearance. The bottom has darkened, the interior has become stained, and there are specs and bumps all over that make it look well-loved. (which it is!)

Because basically everything I cook in there is dark (meats, stews, gallons of tomato-based sauces), long ago it lost its shiny white luster. A few years ago I tried to tackle the interior stains, and found that a bit of bleach or OxyClean mixed with water and left to soak overnight helps reduce the appearance of stains.

I’ve come to terms with the fact that the interior will never be shiny and white again, but it’s light enough that I can see what I’m browning with no problems.

Hopefully, you already know that a cast iron Dutch oven is a heavy beast of a thing. This one is around 14 pounds, so when it’s filled it can be tricky to handle. However, the handles are great — sturdy and comfortable to hold.

Lodge Dutch ovens are heavier than the French counterparts by a few pounds — that’s another “perk” of spending a few hundred dollars versus less than a hundred. Even so, a Dutch oven is heavy, period (it is cast iron, after all), so anyone who might have issues handling it should know that going in.

I’ve learned a lot about how you should treat a Dutch oven in the time that I’ve owned mine. As I said, I’ve had it for 10 years, and when I got it I was still fairly new to cooking, and definitely new to cooking with anything other than my cheap nonstick pot and pan set. I probably didn’t do everything right from the beginning. I’ve probably stuck a metal utensil in from time to time, or heated it on high, or committed some other no-no. But it’s still in good shape, I don’t have any chips in it yet, and it performs as well as it ever has.

Most of the negative reviews I’ve seen have to do with the enamel chipping, so I know that’s something that can happen. However, I’ve yet to experience any chips in 10+ years of use.

I’ve used this more times than I can even fathom. On the stovetop, in the oven, going in between the two. In the 10 years I’ve had it, I’ve learned lots about how to treat your cookware and kitchen gadgets, but my Lodge Dutch oven never suffered from my naivety.

The price on this Dutch oven simply can’t be beaten, and you’re really not missing out on anything in terms of performance if you choose this over a more expensive one. I hope to invest in a French brand someday, but Lodge is a brand I’d never hesitate to recommend to anyone who doesn’t want to spend $300 on a pot. Plus, if it’s your first one, you’ll be able to learn and grow with the Dutch oven and mistakes with it won’t cost nearly as much.

Last night I made some AMAZING short ribs, and I was reminded again why this pot is my favorite one in the kitchen. I happily recommend and expect you can get many years from this enameled cast iron Dutch oven.