If you’re in the market for an excellent blender, it’s a sure bet that Vitamix has hit your radar at some point. It’s an expensive brand, but it’s well known as one of the very best. And, among the best of the best is their top selling Vitamix 5300.

I’ve had this blender for a few years now, so here’s my hands-on review of it. 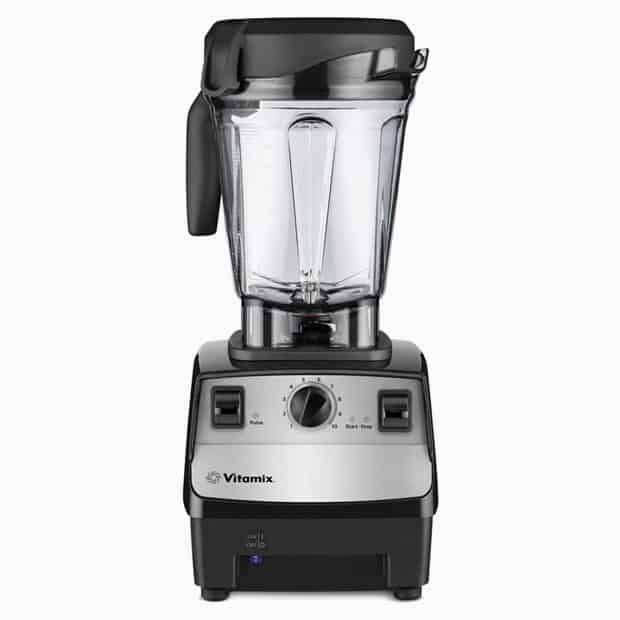 Before my Vitamix, I had a regular old Oster blender that made an occasional smoothie or milkshake, and that I sometimes used in the summer for watery margaritas. I personally didn’t have the desire to splurge on a several-hundred-dollar machine in order to whip up fruity drinks or make batches of hummus. I was aware of Vitamix but it was not in my cards…or so I thought.

Then my mother-in-law went a little crazy one Christmas and got all the families the Vitamix.

So, wanting to make the most of it, my husband and I started using it right away: smoothies, soups, hummus, nut butters, and more. We’ve been very impressed by it overall, even if our usage of it has gone down over the past year and a half or so.

Before we get into details, let’s take a look at some of the specs and features of this Vitamix.

As you can see, it’s a big blender. Vitamix says it “fits under most cabinets” but many reviewers don’t find that to be true. It’s hard to store because of its size — I have to put the base in one cabinet and the container elsewhere in order to put them away.

The size also means you can make huge batches. I can make large smoothie servings for my family of four with no problem. I find that the blender actually does better when there is more in it. Sometimes it struggles with small batches of things, which some reviewers state is an issue with the “low profile” container. Some reviewers who moved from the 5200, with a taller container, to the 5300 find that there are particular types of blending that the taller container does better.

The 5300 comes with a “tamper,” which is Vitamix’s patented stick that fits through a hole in the lid to get ingredients unstuck. I use this quite often when making large batches of smoothies, mostly because I end up always making them too thick — it takes a lot more liquid than you’d think when you use frozen fruits.

The only issue I run into really is, as I mentioned, smaller batches can be difficult to process. It also heats up pretty quickly, but that can mostly be solved by pulsing or stopping before it gets too hot. But also, running it at higher speed versus lower speed helps it stay cooler. The fact that it heats up at those lower speeds is nice for making soups right in the blender.

My best suggestion is to always follow the directions provided by Vitamix: Start out on low and slowly increase speed. This makes a big difference in how well it blends by following these steps. Have patience with it for best results!

It is very easy to clean the Vitamix, even though it’s not dishwasher safe. To clean, simply add a few drops of dish detergent into the container along with some warm water, run it for a few minutes, rinse, and that’s it! I have never had any issues cleaning it, no matter what I’ve made in the blender.

The 5300 is an all-around excellent blender. It makes short work of creating smoothies with nearly any kind of fruits and veggies (though you’ll need to chop some green veggies before blending to avoid them getting wrapped around the blades). Honestly, this blender is probably going to blend whatever the average person needs blended, and it will do it well.

Vitamix also has a great warranty, and their products are known for lasting many years. It’s a solid name that you don’t have to be skeptical of.

It has a powerful motor and intelligently designed blades, and the legions of Vitamix fans out there can tell you that this means the blender is highly versatile. I don’t have a food processor, but the Vitamix does many of the food processor-ish tasks I run in to. There are also tons of resources online, with recipes and tips specifically for the Vitamix.

Bottom line? There are very few reasons I wouldn’t recommend this. If it’s in your budget and you have the space for it, I’d say go for it.

There are two main drawbacks to this blender: cost and size.

It is not cheap. You can find certified refurbished blenders for a pretty big cost savings, and reviewers generally have good luck with those. But still, you’ll be shelling out several hundred dollars no matter what.

It’s also very large, which makes it hard to store (and impossible to store in some kitchens). Vitamix says it’s sized to fit under most kitchen cabinets for on-the-counter storage, but that doesn’t mean it fits under everyone’s cabinets.

It is pretty noisy, as well, but it’s hard to fully commit to this being a con because you have to expect noisiness from such a powerful appliance. Sure, there are quieter blenders, but you’ll either pay a lot more for them or they won’t be of the same quality.

Another con that some people mention is how it handles greens. However, what many buyers don’t realize is if you’re wanting green juice all of the time, you’re better off shopping for a juicer rather than a blender.

While I definitely love my blender, it’s honestly not something I would ever spend the money for. That’s mostly because I just don’t use it all that much. I did at first, but the reality is my family is not really a blending family.

My sister-in-law and brother-in-law also found that they loved their old Ninja more than the Vitamix they received that year, so some people might prefer different kinds of blenders.

Having said that, I know there are a great many people out there who do love their Vitamix blenders. Here’s who I think would benefit most from buying a Vitamix 5300:

And, of course, you have to make sure you have the storage space and the $350-$500 it could cost you. If you intend to do a lot of grains or dry materials, you might find that you need a dry blade or separate container, so keep that in mind as well.

What are your thoughts on the Vitamix 5300?